The mainstream comes to you, but you have to go to the underground.
--Frank Zappa

So every generation has got to tear down the old and rebel with the new--creative destruction to borrow a term from the economists.  I'm especially fascinated by the art and music scene of Greenwich Village in the 1950s. Here's a short list of some books on my shelf on the life of the cultural underground with a heavy slant on New York.


1.  Down and Out in Paris and London, George Orwell (1933).  Before his success as a writer, Orwell lived in near-poverty working as dishwasher and other menial jobs.  This Mostly autobiographical, part novel, Orwell's life among the bottom rung of Bohemians in the early 1930s.  Bought new. 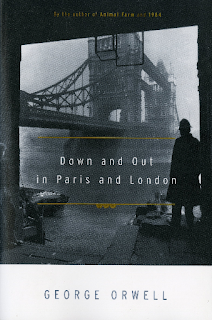 2.  Down and In: Life in the Underground, Ronald Sukenick (1987).   Sukenick tells the history of Greenwich Village and how this small part of Manhattan became the center of artistic life for Hipsters, Beatniks, Hippies and Punks.  Sukenick writes about some of the darker, more sinister aspects of the Village. Maps with landmarks and black and white pictures.  Bought new on a remainder rack. 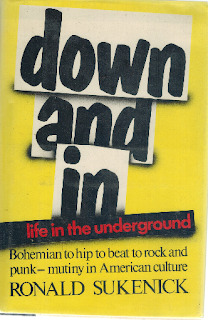 3.  Prime Green: Remembering the Sixties, Robert Stone (2007).   Before novelist Robert Stone gained success as the author of Hall of Mirrors, Dog Soldiers and later books, he lived the life of a gypsy in the 1960s.  Stone was friends with Ken Kesey and witness to his rise and fall with the merry pranksters.  Good stories and no shortage of drugs.  Bought new. 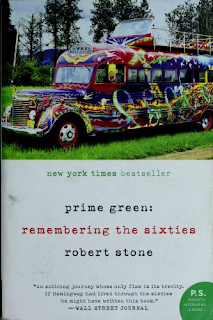 4.  Burning Book: A Visual History of Burning Man, Jessica Bruder (2007).  Burning man is an extravaganza of creative, independent revelry set in the middle of Nevada's Black Rock Desert.  Bruder's book is full of color pictures on every page giving an account of how Burning Man started and illustrating what it had become.  Christmas gift from a cousin in lieu of our commitment to leave our families and attend the actual event.

5. When Kafka Was the Rage: A Greenwich Village Memoir, Anatole Broyard (1993).  Brooklyn born and raised, Broyard went off to WWII and returned to move into Greenwich Village in 1946 and started university on the GI Bill. His adventures with the post-war avant garde, romance, pycho-analysis, and running a second hand bookstore.  Bought new at Barnes and Noble. 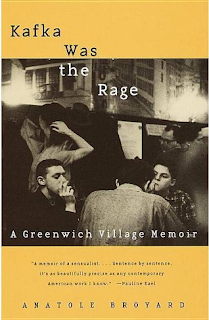 6. Great Demon Kings: A Memoir of Poetry, Sex, Art, Death, and Enlightenment, John Giorno (2020).  A memoir of living in Greenwich Village in the 1960s. Giorno made a name for himself as an artist and was intimately involved with Andy Warhol and other artists of the Abstract Expressionist movement. (As of this entry, I'm waiting for the book to arrive; ordered online from Mac's Back Bookstore in Cleveland). Part of my on-going fascination with New York's art scene in the 1950s and 60s. 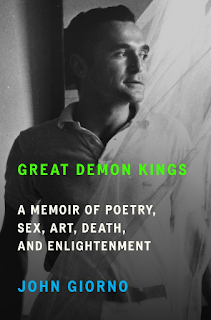 Posted by Compulsively Aimless at 6:47 AM No comments:

Old but Not Dead: Vintage Textbooks

Earlier I looked at vintage tour guides. Today, it's vintage textbooks. The small sample I have, I treasure. They're an example of newer isn't always better. Comparing these books of the late 1890s and early 1900s to my textbooks of the 70s and 80s I would take these. They've not only stood the test of time as well-organized, written in concise, plain English, and they even look good on your bookshelves. What stands out is that these books were also sturdy--hard covers and bindings that still hold together and must have been made for durability knowing the treatment they'd be getting from student wear and tear.

Of my four books, two were published by The American Book Company (ABC), an educational book publisher that specialized in elementary school, secondary school, and collegiate-level textbooks. They were best known for publishing the McGuffey Readers, which sold 120 million copies between 1836 and 1960.  The other two books were published by their main competitor, Macmillan Publishing, an offshoot of the Macmillan UK publisher. 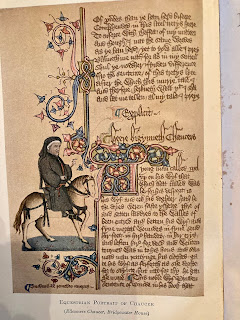 1. A History of English Literature by William Allan Neilson and Ashley Horace Thorndike (Macmillan Company 1923).  With a name like Ashlely Horace Thorndike, your destiny to is write such a history. This book, now nearly 100 years old, was owned by David H. Popper of "Shepherd 12". Some of the pages are filled with Mr. Popper's pen and ink notes. A thoughtful balance of illustrations, chronological tables,  portraits, and excerpts. Purchased for $1 but can't remember where.
2. Myths of Greece and Rome by H.A. Guerber (American Book 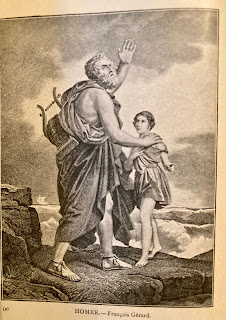 Company 1893). Being Victorians there is some good commentary occasionally mixed in with the history. A favorite example, Erebus (Darkness) first act was to dethrone and supplant Chaos and then, thinking he would be happier with a helpmeet, he married his own mother Nyx. Of course with our present views this marriage was a heinous sin; but the ancients, who it first had no fix laws, did not consider this union unsuitable... .  Excellent illustrations with text supported by quotes from poets and scholars through the ages. Bought for $2, likely from the State Department Bookstore. 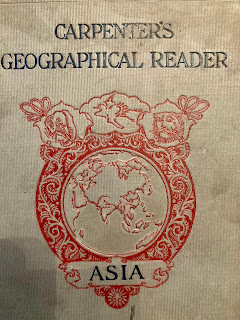 3. Carpenter's Geographical Reader: Asia by Frank G Carpenter (American Book Company 1897). Part of a series, I only have this one, this looks like it spent some time on classroom shelves with the battle scars to prove yet still holding together. It looks like it was sold and resold ffor .25 cents, .15 cents, then I bought it somewhere for $1.
4. The History of Greek Art by F.B. Tarbell (McMillan company 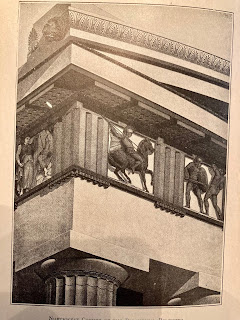 1930).  The book follows the style of Macmillan being well organized and illustrated. Solid with navy blue binding. Bought used for $4 somewhere. 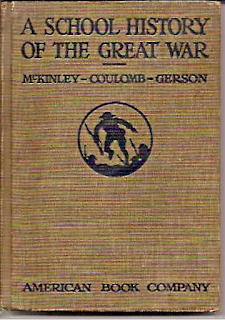 5. A School History of the Great War, McKinley, Coulumb and Gerson  (American Book Company, 1919).  Greatly enjoy this little book although it’s designated as a school book, I probably learned more from this than some of the giant tombs on World War I. While the book is over 100 years old it presents in concise well organized format in plain English. It’s always interesting to have the perspective of a book written shortly after an event such as this one—the title alone, the "Great War, has no number behind it; they only imagined that this was the war to end all wars. And I may be a bit of a fogey here but I do think we could use these books today as an effective teaching tool. they are well-made nice compact size with maps inserted along the way and a nice chronology of events at the back.  Bought used at State Department bookstore.
Posted by Compulsively Aimless at 10:43 AM No comments:

If you cart your books around long enough they turn into a library but also a snapshot of your brain. I have carted some of my childhood books around long enough to see those snapshots. When I was in 11 and 12 years old I went through a World War II phase and especially a tank phase. For that couple of years, I asked for books on tanks for my birthday and Christmas. I've carted them around and pulled them out. Here’s my collection from years back plus one recent book. 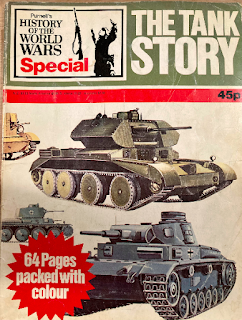 1. The Tank Story: Purnell‘s History of the World Wars Special Edition (1972). More of a magazine than a book, this was part of a series printed in the U.K. One of my first purchases during a family trip to England for Christmas when I was 11. It was perfect for me because it had a lot pictures. Price "45p".
2. Tanks: An Illustrated History of Fighting Vehicles, Armin Halle/Carlo Demand (1971).  It starts with antiquity  including Leonardo DaVinci's designs but spends the bulk of the book on tanks from WWII. Christmas gift from my parents. 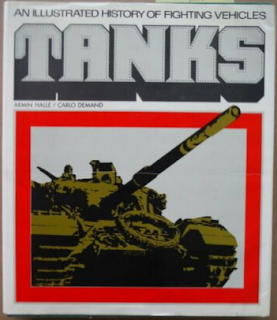 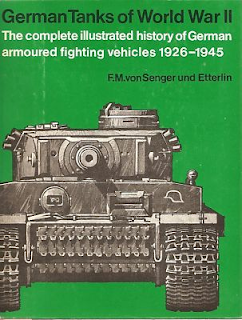 3.  German Tanks of World War II: 1926 to 1945, F.M. von Senger Und Etterlin (1969).  With a name like the author's, you have to be destined to write a book about German tanks. More technical than you want for a 12 year old and more suitable as a reference book for a military historian. Another book I would have pestered my mother for during my "tank phase".  I remember bringing it to school and lending it to a friend who wanted to a report on tanks.
4.  Tanks and Other Armored Fighting Vehicles: 1900 to 1918, B.T. White (1970). 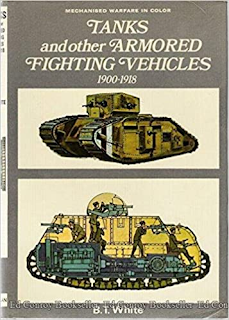 Part of a series, Macmillian Pocket Encyclopedias in Color. By this time, I was getting more obscure with my "tank phase" and wonder how I picked it out. WWI takes were not as interesting as WWII tanks--they were usually big bulky mountains of metal or lightly armored cars. One of the Russian Armored cars, the Garford is shown with a Skull and Crossbones. 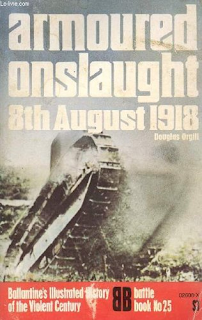 5. Armored Onslought 8 August 1918, Douglas Orgill, 1972. One dollar paperback books part of Ballantine's illustrated history of the "Violent Century." Buying Ballantine books was like buying an expensive magazine. They kept coming out with them but they were only $1.
6.  Kursk: The Clash of Armor, Jeffrey Jukes (1968). 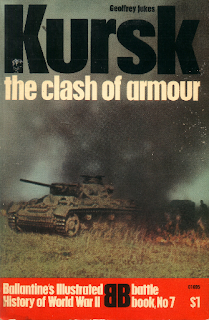 Another in the series of Ballantine's illustrated battle books of World War II. Kursk was the largest tank battle in history that occured on the eastern front between Russia and Germany. 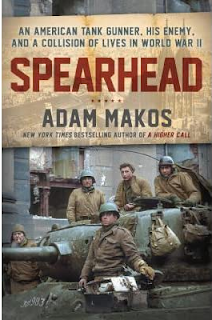 7. Spearhead: The Incredible True Story of World War II's Expendable Heroes, Adam Makos (2019). This is the one recent addition I bought online and read late last year. A great first hand account of the most modern tank introduced by the Americans at the end of World War II and its duel with a German Panther in the city of Cologne Germany. I suppose this brings my 12-year-old interest in tanks full circle over 40 years later.
Posted by Compulsively Aimless at 8:07 PM No comments: