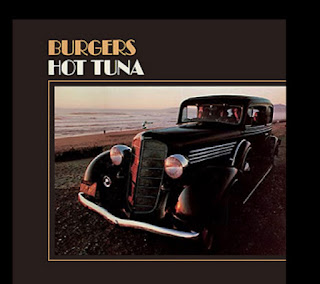 I  just happen to hear Water Song by Hot Tuna on my streaming service this evening. This prompted me to think of how much we associate certain  songs and music with a time and place. During my time at Denison I made a  lot of strong associations with songs (some I don’t  necessarily like.) I was lucky enough to work at WDUB as a DJ and it exposed me to lots of music. Here's a handful of Dension-Song associations:

*The  Rolling Stones - Honky-Tonk Woman. The afternoon I moved into my dorm freshman year at Curtis East, I distinctly remember hearing the clinks of a cowbell and then the crash of Charlie Watts's drums. The dorm mate one floor below had just hooked up his stereo and was turning it up to “11”.  It seemed to say this is freedom. I’ll always associate that song  with my first day at Denison.

*U2 - I Will Follow. On a brisk October night I walked into the basement of  Blair Knapp Hall and for the first time into the WDUB studio. There was a  girl who I had talked to about poetry and she invited drop by the station to visit. The first song I heard her play was U2 I will  follow. It made a strong first impression and I  remember the sound effect of the glass dropping and breaking.

Hot  Tuna- Water Song. I can’t remember the first time I ever heard this cool but mellow instrumental but I heard it many times around WDUB. It seem to  be the perfect laid-back college vibe that served as a backdrop for experiences at Denison.

Steely Dan - Bodhisattva. By my senior year, I had a Friday afternoon slot at WDUB. I remember my last semester, at the end of one of my last shows I  played Bodhisattva by request as my sign off song for the day. It breaks the five minute mark and has a frenetic guitar solo as its climax. I  can remember leaving the station and walking down for Fraternity row In the late afternoon sun hearing the song blasting out of the Phi Delt house.

Pat  Metheny - It's for You. I’ve always associated this song with graduation day. It starts out somewhat joyful but it’s tinged with lots of melancholy, which is how I felt that day--the end of something, a new beginning but also thinking about missed opportunities. Coincidentally, it was  used in the movie soundtrack for Fandango, which was also about the end of college.

Posted by Compulsively Aimless at 8:12 PM No comments:

NEW BOOK: COLOR CAPITAL OF THE WORLD: GROWING UP WITH THE LEGACY OF A CRAYON FACTORY

In the words of Monty Python, "and now for something completely different." I'm shamelessly promoting my new book due out this fall --it's the story of the crayon and about growing up with a crayon factory in the Midwest. I also learned from veteran authors — pre-orders are a huge part of getting a book off the ground. So here's my shameless plug, If you're interested, pre-orders are available through independent bookstores listed in the right side of the page and through the sites below:
and of course the big guys 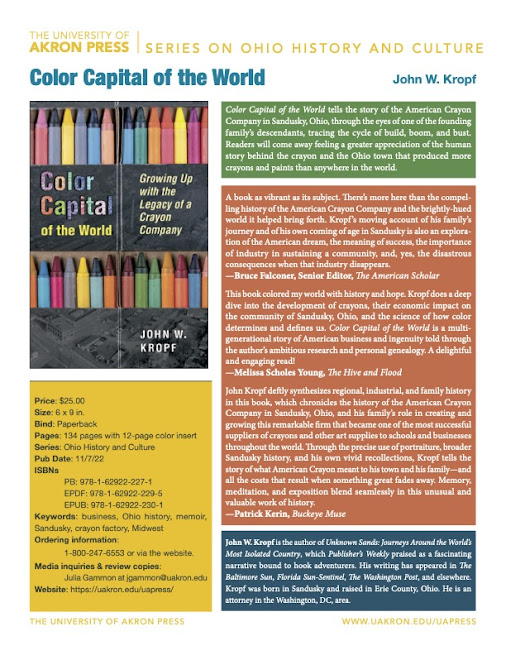 Posted by Compulsively Aimless at 6:53 AM No comments:

COLOR CAPITAL OF THE WORLD: Growing Up with the Legacy of a Crayon Factory 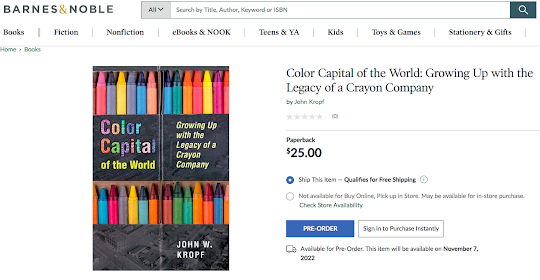 Posted by Compulsively Aimless at 2:48 AM No comments: 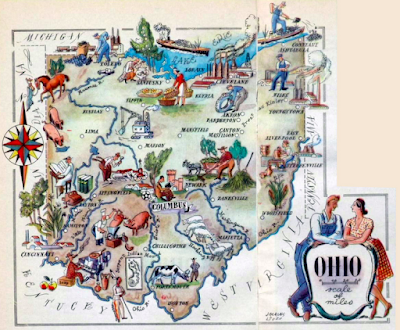 Over the years, I tallied up the number of references to Ohio in movies and television shows. If a TV show wants to portray the average middle-of-the-road American setting Ohio seems to be the default. Alternatively, Ohio is used as an unsophisticated foil to the glamorous setting of the coastal elite. My hometown of Sandusky seems to get more than its fair share of references. Satirist P.J. O'Rourke's comical short story, The King of Sandusky uses the plain settings of north central Ohio towns and landmarks as a contrast for his plot of medieval intrigue. I once met him at a book signing and asked him, "why Sandusky?" He said it was because he couldn't use hometown of Toledo and Sandusky was his next best stand-in.

Here’s a partial list of my tally of TVs and movies set in Ohio. There's plenty more out there, feel free to add your own.

Posted by Compulsively Aimless at 7:53 PM No comments: 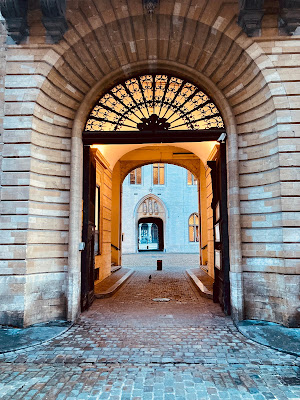 Storm Spiders
At night
after the storm
broken branches
litter the road
like giant tarantulas.

I have my grandfather's gun, a .32 caliber Smith & Wesson revolver. I don't know if he ever fired it. I also have my other grandfather's gold deputy sheriff's badge for Kent County, Michigan. Both enlisted in the Army in WWI. By WWII, they were in their 40s. As the younger men went off to war, both served as volunteer Deputy Sheriffs. Both had John in their name. Named after their fathers.

All the life put into him: the books, the trips, the loves, the seasons. And then one moment. like everyone else, it's gone.

Expiration Date
Time arrives in crates
from a far off distributor
unloaded in the back room
and sold retail.

The green light is always waiting for you at the busy intersection.

Posted by Compulsively Aimless at 5:40 PM No comments:

A TIME OF GIFTS 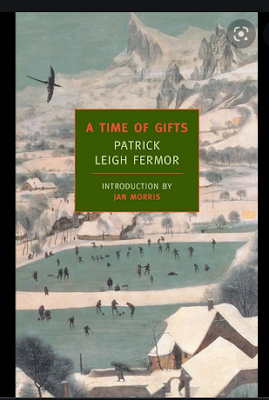 An all time favorite travel writer, Patrick Leigh Fermor, who wrote among other things, a trilogy of books about his walk from the hook of Holland to Constantinople. He was 18 at the time and crossed through Europe in 1933-4 as it was slowly moving toward a war footing. Fermor is a favorite because of his gift with language -- his travel narratives descriptions are more like poetry than prose. Later, he fought in WWII in a British commando force conducting raids in Germany occupied Crete, including the kidnapping of a German General. He was later knighted for his services. Fermor's writing is truly one of a kind by combining adventure and his gift for language, he keeps you turning the page to see what person or village he would encounter next. I even wrote a Cento poem derived from the first book, A Time of Gifts that was published.

Sharing a random sample of some phrases I like (this is about a tenth of what I underlined):

I was abroad at last, far from my familiar habitat and separated by the sea from the tangles of the past; and all this combined with the wild and growing exhilaration of the journey, shed a golden radiance.

...a hangover from early anarchy.

He is a dangerous mixture of sophistication and recklessness, which makes one anxious about his influence on other boys.

...napkins were half mitres and half Rajput turbans.

...vanished from the scene but deep in the bloodstream nonetheless.

Moody and unbalanced, he lived in an atmosphere of neo-plantonic magic, astrology and alchemy.

a vagabond full of random learning.

Posted by Compulsively Aimless at 9:28 AM No comments: 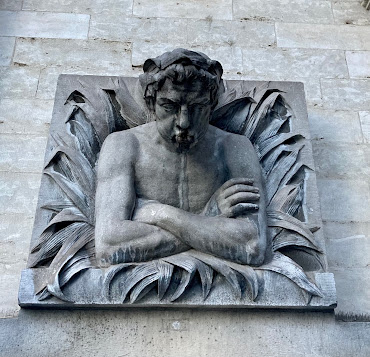 Every few months I clean out miscellaneous scraps from my journal and set them on the back porch. Offering these up on Black Friday for your minor amusement.
World Travel
If I'm sitting at my local coffee shop
it's everday.
If a person from Mongolia is sitting at my local coffee shop
it's world travel.
Band Name Generator
The Papal Snoods
The Terrible Suggestions
The Eckington Dump
Leper's Squints
Popskull [19thC slang for cheap whisky]
Shopping Blahs
Low fat
this and that
Memory Climate
The cold ember
of a hot memory
Cento from The Third Coast, Thomas Dyja
It was a voluntary madhouse
a museum of expired vices
a final cry
for ruined lives.
Night Time
Sometimes midnight is not
late enough for midnight thoughts
Maybe 3am or thereabouts
When I can hear the flag rustling
in the cold wind.
Memorable Names from the book, Journey to a War, W. H. Auden and Christopher Isherwood
Agnes Smedley
General von Faulkenhauser
W. Fitzhugh Brundage
A Naked Advance
No one never not noticed the nudist.
Cheer Up
His soup was lumpy
which made him grumpy
and his family jumpy
A While Back
The sharp dark
of the old park
and a youthful lark.
Posted by Compulsively Aimless at 8:22 AM No comments: