I have a lot of books on roads, road trips and road adventures.  Trying to organize them into categories can be difficult.  There are cross country road trips, meandering road trips, and road races.  Then there are the purposes for which people travel roads---pilgrims set out to make a new life.  When I finished law school, the greatest freedom I could think of was to get in my car and drive across country.  Car + 26 year old, and lots of roads meant freedom.  That trip was part pilgrimage. I retraced a 1919 trip my maternal grandfather made at the same age.  I tried unsuccessfully to publish a book out of the adventure.

This group is picked for some of the most adventurous road trips with a little history thrown in. 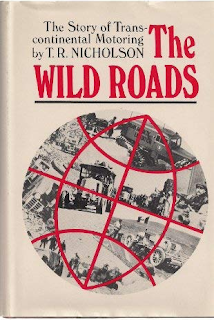 1.  The Wild Roads: The Story of Transcontinental Motoring, T.R. Nicholson (1969).  Stories of motoring firsts in the early age of the automobile.  Nicholson's expertise in early automobile adventures hit the sweet spot of my interest.  Bought used from Gabriel Books, Amherst, MA. 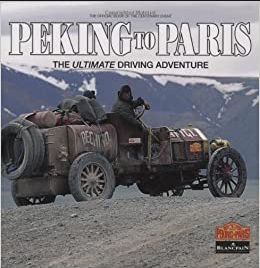 3.  Peking to Paris: The Ultimate Driving Adventure, The Official Book of the Century Event (2007).   Beautiful color picture book and compliment to the original 1907 race documented above.  Don't know what is crazier--to attempt it in 1907 or to recreate the event with some of the vintage cars.  Bought new. 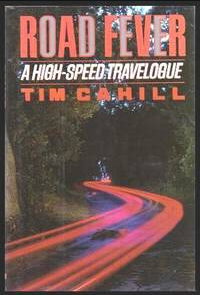 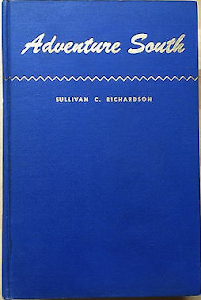 A precursor to Road Fever.   Three men blaze a trail down the Pan American Highway in a stock 1941 Plymouth all the way to Cape Horn.  Bought used but can't remember where.

6.  Rough Road to the North: Travels Along the Alaska Highway, Jim Christy (1980).  The northern complement to Adventure South.  Christy gives the history of the 1,500 mile ALCAN highway.  Bought used at the Leland, Michigan Public Library. 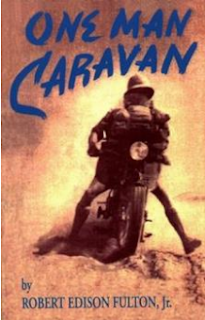 In 1932, Fulton set off on an 18-month adventure round the world trip by motorcycle.   Fulton took great black and white photos and includes his own sketches.  Bought new.

8.  Merchants, Pilgrims and Highwaymen: A History of Roads Through the Ages, Herman Schreiber (1962).  Originally published in German under the title, Sinfonie der Strasse.  Schreiber traces trade routes, the Silk Road, The Iron Road and other historical roads.  Bought used but can't remember where.


Posted by Compulsively Aimless at 8:06 PM No comments:

Still waiting to travel there.

1.  Coming into the Coutnry, John McPhee  (1977).  The only one of the list I've read.  A masterpiece of McPhee's stellar work.  He has a knack for finding interesting characters and adventures.  Conveys a sense of a country unto itself.  Bought used State Department book store.

2.  Disappearance: A Map, A Meditation on Death and Loss in the High Latitudes, Sheila Nickerson (1996).  Bought used in The Raven Bookstore, Amherst, MA.

4.  Birthplace of the Winds: Adventures in Alsaska's Islands of Fire and Ice, John Bowermaster (2000).  Bought used, can't remember where.

Posted by Compulsively Aimless at 4:24 PM No comments:

Write It Yourself - Part I

"To be able to enjoy one's past life is to live twice"
-- Marcus Aurelius
Why keep a journal or diary?  Writing to an audience of one.  I was given a blank journal for high school graduation and have written in it since.


1.  The Assassin's Cloak: An Anthology of the World's Greatest Diarist, Edited by Irene and Alan Taylor (2000).   Organized for every day of the year from a rich set of sources--Pepys to Andy Warhol.   Bought new. 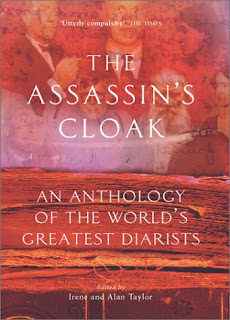 2.  A Book of One's Own: People and Their Diaries, Thomas Mallon (1984).   Chroniclers, travelers, confessors, and prisoners have all kept journals and for different reasons. This anthology samples some of each.  Bought used, can't remember where.

Posted by Compulsively Aimless at 3:40 PM No comments:

Come Fly With Me

The golden age of flying was set off in 1927 by Charles Lindberg and carried on by Emelia Erhardt and others.  I have a few books from this era when flyers were devising new adventures.
1.  Gods of Tin: The Flying Years, James Salter (2004).  Salter graduated from West Point in 1945 and entered the Army Air Force, (later the U.S. Air Force).  A short gem of a book with memoirs from his training, that included losing his way over Pennsylvania and crashing into a house in Massachusetts.  He went onto to fly a tour of duty (100 missions) in Korea in F-86s.  Bought the book new from the author with his inscription during a book night of authors and maybe one of the best nights of my life.

2.  The Flying Carpet, Richard Halliburton (1932).  In 1931, adventurer--writer Halliburton hired a professional aviator to fly him around the world in an open cockpit bi-plane. In 18 months, Halliburton circumnavigated the globe, covering 33,660 miles and 34 countries.  Bought used.  Book shows a stamp inside showing it was originally sold byR.H. Hays and Bros. Hagerstown, MD.

3.  North to the Orient, Anne Morrow Lindbergh with Maps by Charles A. Lindberg (1935).  Also set in 1931, Charles and Anne Morrow Lindbergh set off on a flight to Asia by way the Great Circle Route, a route used today by commercial airlines. Gracefully written by Anne Morrow Lindberg, a poet at heart. Inside the book, the former owner's book plate reads, "One the Books Belonging to to Carrie Atkinson (1936).  The plates shows a poor soul in a stockade for not returning books.

A section of myself dedicated to another author-adventurer--Tim Severin.  Severin's unusual career takes history out of the classroom and travels with a purpose--retracing great moments of history.  My shelf has about half his books.  There are plenty more.

2.  Explorers of the Mississippi (1968).   Severin starts his journey at Lake Itasca in a Birch bark canoe to tell the story of DeSoto and other European explorers of the Father of Waters. Bought used.

3.  The Oriental Adventure: Explorers of the East (1976).  Severin retraces paths of European explorers in Asia.  Lots of quality pictures and prints.  Bought used.

4.  The Brendan Voyage (1978).  Severin sails a leather currach from Ireland to Newfoundland to prove that the voyage of the Irish Monk St. Brenden to the new world was not a myth.

5.  The Sinbad Voyage (1983).  Sailing an Arab dhow from Muscat, Oman to China.  Bought used.  One of the added intrigues of buying a used books are the artifacts that come within.  This one came with a brochure to the Galana Game and Ranching Safari Indian Ocean Lodge.

6.  In Search of Genghis Khan (1991).  In the year of the horse, Severin travels on horseback across the steppes of Mongolia See Genghis Khan.  Bought used.

7.  The Jason Voyage: The Quest for the Golden Fleece (1985).  Recreation of the legend of Jason and the Argonauts.  Bought used.

Posted by Compulsively Aimless at 8:35 PM No comments:

The carpets were works of art with a practical use.  The repeating  designs had a hypnotic effect.  I could feel an irrational urge         posses them, much like what bibliomaniacs must feel for books.

--Excerpt from Unknown Sands, John Kropf and blatant plug of self-promotion for my only book.

Carpets carry a world history in their weaves.  They have a power to tell stories and inspire.  I spent two years in the carpet making country of Turkmenistan.  With time on my hands, I became fascinated with carpets and their secrets. 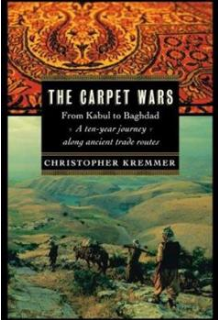 1.  The Carpet Wars: From Kabul to Baghdad, A Ten-Year Journey Along Ancient Trade Routes, Christopher Kremmer (2002).  Part travel memoir, part history, and an adventure story that falls into the middle of the conflict in central Asia.  Bought new. 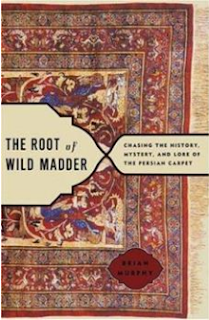 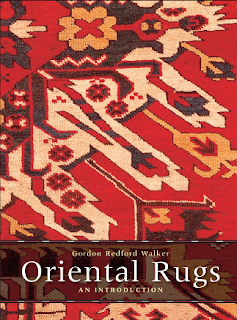 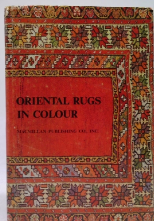 4.  Oriental Rugs In Color, Preben Libetrau (1962).  Originally written in Danish and translated into English.  A slim volume with color plates.  Bought at a the State Department book store.  Found a membership card inside to the Golden Turban Travel Club, 1970.
Posted by Compulsively Aimless at 6:37 PM No comments: