To Everything There is a Season

Have you ever wanted to live in a small piece of land, isolated from the outside world and see what thoughts you'd come up, like Thoreau?   I'm waiting for the day.  Meanwhile, I'm reading about what it's like.  Some close to home and some in the middle of the desert.

1.  Winter: Notes from Montana, Rick Bass (1991).  Living solo in the Montana back country.  Survival depends on the ability to use a chain saw cut wood and not yourself.  Bought used.

2.  A Sand County Almanac, Aldo Leopold (1966).  Set in Sand County, Wisconsin, Leopold's writings about the relationship to the land.    Published by his son a year after Leopold's death .  Bought used.

3.  Desert Solitaire, Edward Abbey (1985).  First released in 1968, Abbey wrote as an eloquent loner.  He worked as a US Park Ranger living for three  seasons in the desert at Moab, Utah.  He shares his views on the land, wilderness and blends in the fictional.   Bought used  paperback at BJ's Books, Warrenton, VA. 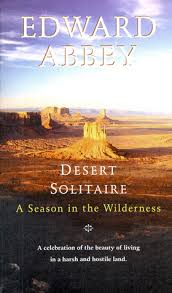 4.  Spring in Washington, Louis Halle (1947).  Not so much a story of solitude but included here more because of it's solitary, Thoreau-like spirit and his observations of the seasons.  Halle is a foreign service officer and amateur naturalist.  Through walks along the Potomac starting from winter he watches the earliest traces of Spring's first appearance in Washington.  Bought used at the State Department book store.

Posted by Compulsively Aimless at 7:20 PM