What's In a Name

I once drove through a small cross-roads in New Mexico marked on my Rand McNally Road Atlas as Pie Town.  I was disappointed that there seemed to be no pies around.  Ever wonder how your town or any town got its name?  Since my passage through Pie Town, New Mexico, I was inspired to find out the origin of place names.
1.  All Over the Map: An Extraordinary Atlas of the United States, David Jouris (1994).   Book is divided in themes: Musical, Mythical, Animal, Historic and contrasting place names. (But they missed Paradise and Hell Michigan.)  Bought new.

3.  American Place-Names: A Concise and Selective Dictionary For the Continental United States of America, George Stewart (1970).  A great reference guide.  And by the way, I learned here that Pie Town, NM takes its name from a man there who used to like to bake pies.  Bought used but can't remember where.

4.  Off the Map: The Curious Histories of Place-Names, Derek Nelson (1997).  Nelson looks behind names from around the world to provide entertaining windows into the history of a place.  According to Nelson, "Cartography is 20 percent geography and science...the other 80 percent is ignorance, myth, greed, the arbitrary, impulsive and ironic...."  Bought new. 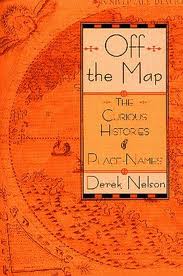 Posted by Compulsively Aimless at 6:47 PM