I’ve been lucky to inherit a handful of books that have come down through the generations on my mother’s side of the family. I think of these books as extensions of family members I never knew but can still understand their thoughts and interests. I try to imagine the life of the ancestor with the book. One day, the book was deliberately selected, or given as a gift, and then read by its owner. Their owners died and the books were taken down from shelves packed up and taken to a new home where they may have been read by the descendant of the owner. They are particularly special because they show the owners added their name to the book.

This is to share what I have in two parts: books of the times and books as artifacts of a life.

Part One: Spiritualism at the End of the 19th Century

Spiritualism flourished in England and America in the 1840s to the 1920s. By the end of the 1800s, spiritualism was said to have more than eight million followers mostly from the middle and upper classes. Three different families on my mother side were all interested in the spiritual. Here are their surviving books from that time: 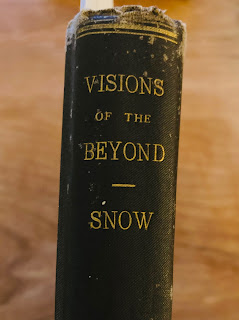 1. Visions of the Beyond, by a Seer of To-day; Symbolic Teachings from the Higher Life, edited by Herman Snow (1888). This book was owned by my third great uncle, John Cowdery who was one of the founders of the American crayon company in Sandusky, Ohio. The editor of this book, Mr. Herman Snow, says that he transcribed the happenings of various seances  conducted by a "mediumistic", Mrs. Anna D. Loucks. The book is stamped on the inside page as belonging to “J.S. Cowdery Sandusky, O.” 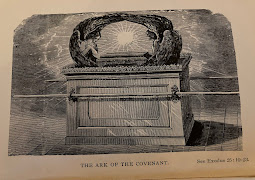 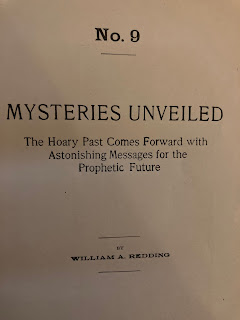 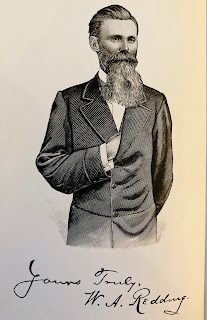 2.  Mysteries Unveiled: The Hoary Past Comes Forward with Astonishing Messages for the Prophetic Future, William a Reading (1896). The book was owned by my great grandfather, John Whitworth, with his last name penciled in the inside page. It is filled with many diagrams and etchings from early biblical times including pictures of the ark of the covenant and diagrams of the great pyramid of Egypt. I don’t know the significance of “No. 9” is but it was symbolic in the Bible as being a symbol of finality. 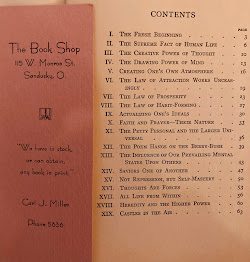 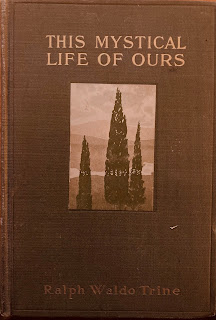 3.  This Mystical Life of Ours, Ralph Waldo Trine (1907). This book was owned by my great aunt, daughter of John Whitworth, with her name was Mary Curtis Whitworth stamped on the inside cover. Trine organizes the book in 52 lessons, one for each week of the year, intended to guide readers through the power of the “ infinite” with lessons like The Law of Attraction and The Law of Prosperity. The book also has a book mark from the book seller in Sandusky, Ohio, telephone 5636.


Next installment: Books as artifacts.
Posted by Compulsively Aimless at 6:00 PM