Four hundred years ago, religious pilgrims left England for a journey that landed on the shores of what is now Massachusetts.  I have a handful of books on the Pilgrims from the Mayflower. 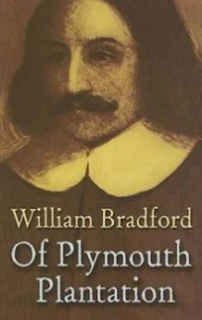 1. Of Plymouth Plantation 1620 to 1647 William Bradford edited by SE Morrison (1952).  Considered the most authoritative account about Plymouth and written by the settlement's governor and driving spiritual force, William Bradford. Bradford tells the story of the Pilgrims' first stop in Holland, their harrowing transatlantic crossing, the first harsh winter in the new land, and the help from Native Americans that saved their lives. The text was lost for a couple of centuries when it was rediscovered and published in the U.S. shortly before the Civil War. Its discovery and return can be credited with Abraham Lincoln's proclamation of a national day of thanksgiving. Editor and eminent historian, Samuel Elliot Morrison described the return to the U.S. as a "literary sensation." Found in a used bookstore but can't remember which one. Paid $3. 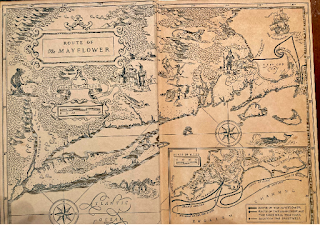 2.  The Plymouth Adventure the Chronicle Novel of the Voyage of the Mayflower, Ernest Gebler 1950.  A best-seller in 1950, it faithfully follows the story of the Pilgrims in the form of a historical novel. Second hand bookstore purchase and can't remember where. 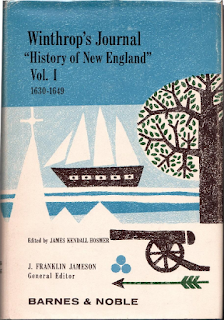 3.  Winthrop ‘s journal history of New England 1630 to 1649 edited by James Kendall Hosmer, 1908, 2 Vols.  Following  the Pilgrim's, Winthrop led a second wave of colonizers from England in 1630 and served as governor for 12 of the colony's first 20 years. His writings and vision for a Puritan "city upon a hill" were the foundation for New England thinking. Christmas gift from my mother. Used with a numbered bookplate inside showing the former owner, Harold A. Ritz. 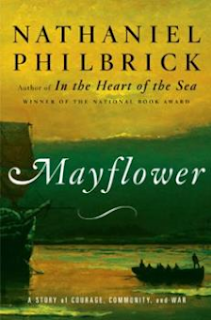 4. Mayflower Nathaniel Philbrick, 2006. Philbrick writes an accessible history of the Pilgrims, giving a contemporary account to look behind the myths that have grown up.  Bought in a used bookstore and can't remember where.
Posted by Compulsively Aimless at 5:52 AM