Born in a Small Town 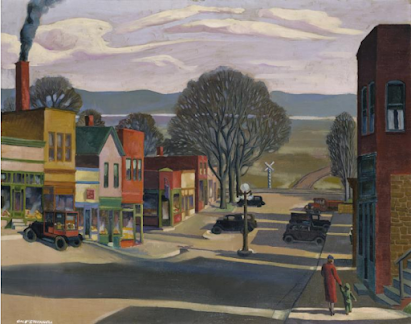 Historically...small-town America has been an underground reservoir of values for the larger nation, sending out its foods, its ambitious youths, its family values and its fad-free common sense attitude to the larger nation.  The underlying and ominous warning is that the inevitable reservoir of values, like the aquifers beneath many of the cities, is being rapidly fouled and sucked dry by a larger society that may soon find, to its uncomprehending surprise and distaste, nothing of value coming up from the straw.

I'm a sucker for books and poems about small town life. I grew up in and around a medium and small town in northern Ohio and the longer I'm away, the more of a tug I feel toward the memories and familiarity of those places. It's ironic having lived in the Washington, DC area longer than Ohio but the earliest formative memories maybe the most powerful. There's a mix of nostalgia, melancholy, and rootedness. Here's my mix of books that profile the importance of America's small towns. 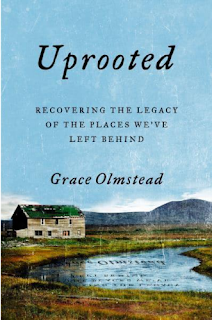 1.  Uprooted: Recovering the Legacy of the Places We've Left Behind, Grace Olmstead (2021).  I saw this reviewed as a new release and went out and bought it in a real live bookstore the day it came out. This is next on my reading stack. The author's story of growing up in Emmett, Idaho and relocating to Washington, DC, had immediate appeal. Olmstead asks where can you find rootedness? 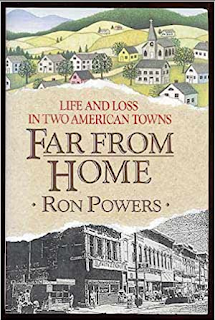 2. Far From Home: Life and Loss in Two American Small Towns, Ron Powers (1991). Powers is Pulitzer Prize winning author who returns to his hometown of Cairo, Illinois in the 1980s and looks at the town's abiility to recover from racial strife in the 1960s. He compares its experience with the affluent Kent, Connecticut that is transforming into a different direction with exurban weekenders dislocating local traditions. I read a NYT book review on this in 1991 and wrote down the quote above but never bought the book. Finally bought from a thrift bookstore online. 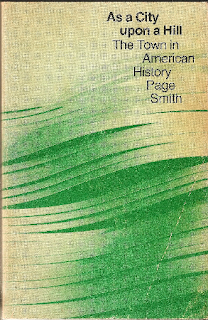 3. As a City Upon a Hill: The Town in American History, Page Smith (1966).   The title inspired by scripture from the Bible used by Jonathan Winthrop speaking to the Massachusetts Bay colonists. Published by MIT Press, the author places the American town as a foundation for community creating a common good for the country.  Bought used at the State Department book store. 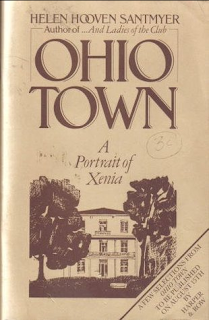 4.  Ohio Town: A Portrait of Xenia, Helen Hooven Santmyer (1962). Santmyer grew up in Xenia and went away to school at Wellesley and Oxford and worked for a time in New York City for a Scribners. Her recollection of Xenia is considered a superb blend of hisotry and memoir of a small town. Bought used online.  (Included in another list about Ohio.) 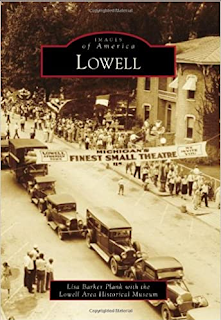 5.  Lowell, Lisa Barker Plank with the Lowell Area Historical Museum (2010).  I'm exercising some personal bias by adding this one. Lowell, Michigan was my father's hometown. We used to visit during summers on our way up to northern Michigan. it seemed to be a composite of real and fictionalized American small towns: Mark Twain’s Hannibal, Sherwood Anderson’s Winesburg, Thornton Wilder’s Grover’s Corners and Ray Bradbury’s Green Town. I could imagine boys with sticks rolling hoops down the main street or whitewashing fences in bare feet and girls jumping rope singing, songs in cadence to the smack of the rope. Bought online. 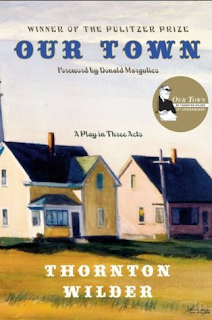 6. Our Town, Thornton Wilder (1938). The Pulitzer Prize winning drama of life in the village of Grover's Corners. It remains one of the most performed American plays. Grover's Corners seems an emblematic representation of a small town and for that reason I made an exception and included a work of fiction. Bought from a thrift store online.
Posted by Compulsively Aimless at 9:58 AM