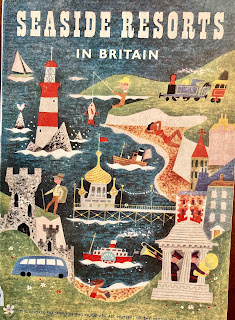 Printed 10 years after the end of World War II, the cover features very clever and colorful artwork. Inside is a series of summaries on British seaside towns from Lands End to the Orkney Islands and everything in between with black and white photos of towns landmarks and vacationers. Curiously, there's a stamp on the back, "Your vacation in France begins in New York when you travel France afloat go buy French line." Bought used at the State Department bookstore. 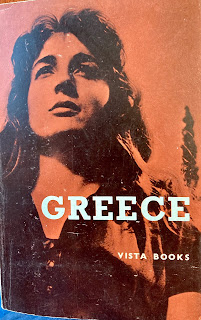 Greece, Mimic Cranaki (1960). "$1.25" Part of a travel series by Vista Books, a small imprint of Viking Press that published a series of 12 books, mostly European. Grease. The guide is an unorthodox approach with a series of essays about Greek history and culture. Definitely strong commentary that you won’t find in most travel books, e.g., “all creatures on two legs are scoundrel’s who have sold themselves to the Americans.“  Four pages at the back of the book have a few practical tips on phrases and advice. 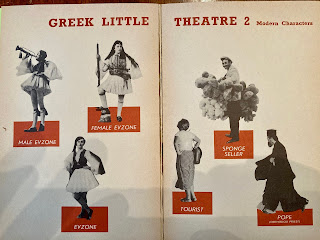 Posted by Compulsively Aimless at 7:19 AM